Okay, so I guess the title here is The Crew: Calling All Units, but that I believe is because of the most recent DLC that was incorporated into the main game, which is something that I find rather annoying as there is no way that I have found out to not get notifications (that will come up later).  In its purest form, I would describe The Crew as an online multiplayer open world racing game.  There is, at least in the beginning of the game, an emphasis on street racing, although through the DLCs, other forms of racing including off road, drag, obstacle, and police chases have also been included.

Coming from a background of F-Zero and Mario Kart on everything from the SNES, Game Boy Advance, N64, and Game Cube, I have never had much of an interest in semi-realistic racing games the like of Gran Turismo and Need for Speed.  Well, now that I think about it, I will play Pole Position if I see that cabinet at an arcade, and I did play a few Indy/F-1 racing games on the NES, but for the most part, this genre does not immediately pique my interest.

So what about The Crew has made me sink no less than 20 hours over the last month?  Well, first off and possibly most importantly, I received the game free last year as part of Ubisoft's six month campaign to get people interested/excited about their games client Uplay.  Secondly, as stated above, the game is open world, so in order to get from one race to another, you have to drive your car there, and there is no getting out of the car, which is fine with me, if a little silly at times.  Thirdly, take a look at the map!

That is the lower 48 states.  Well, sort of.  The greyed out area is unexplored while the green areas are the places I have drive through, and if you look closely enough, you will notice a number of geographical irregularities.  First off, Las Vegas is not actually located in Wyoming, and upon closer examination, Oregon does not exist.  What we have here is an approximation of the United States similar in thought to the Little States in Pilotwings 64.  Not every little detail is here, but it is enough to at least have the flavor of various geographical regions; even if French and British game developers completely leave out the state you find yourself living in.  But yeah, at least Northern California is there, up near South Eastern Washington state apparently.  And the last time I was in Detroit, I believe the distance to St. Louis was something along the lines of 15 miles, as opposed to the 550 in real life.

Now, I am probably going to get some flak for saying this, but I genuinely feel that The Crew is a great racing game for casual racing gamers.  What I mean by this, is first off, you are able to purchase (with both in-game and real world currency) real world cars that you can tune to your ability's content.  And while you do acquire part upgrades to make your cars performance better, I don't think you need to actually understand those car parts in order to appreciate that your car can now break faster, accelerate faster, turn tighter, and um, car better than before.  All upgrades you receive you are able to equip right there mid drive, which actually brings me to the UI. 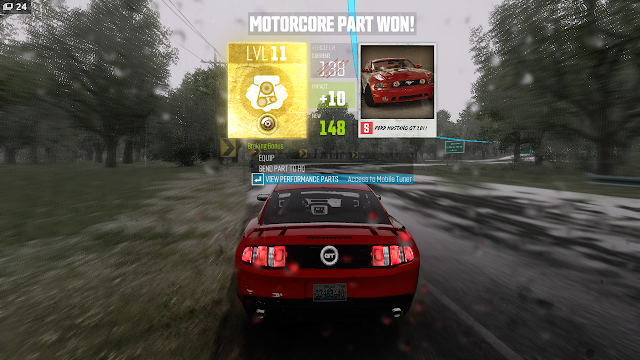 What appears to be happening here, is that I did something cool that allowed me to upgrade my "Breaking Bonus" by 10 points, and then this pops up on your screen while you are barreling down the rain slicked highway at upwards of 150 mph.  Now, I may not be the best driver (virtual or real world), but obscuring roughly 17% of the screen doesn't seem like the safest option especially considering the fact that you are playing online and has happened at least once, the new item may not be as good as your current equipped part.  But the point is, for a casual racing gamer such as me, simply knowing that my car now has a higher rating is really all that matters in the end.

Another reason why I call this a casual racing game, is that the in-game engine (Babel) and the physics engine (Havoc) work well for the most part, as they are very forgiving, and will frequently auto correct the car back onto its four wheels.  This is not to say that you cannot crash, because if you hit anything (other cars in particular) driving fast enough, you will wreck your car.

Also, any damage sustained to your car will automatically repair itself while you are driving.  I don't think it even deducts virtual money from your virtual bank account either.  And even the damage your car sustains during the game is pretty negligible.  Occasionally your rear bumper will dangle a bit from one side, but before you realized it, it will have pulled itself back up by its proverbial bootstraps and your car is none the wiser.  And like the above, I don't think you lose any money when you total your car, or when you are pulled over during a police chase (more on the police later).

Since this is essentially a multiplayer, I have come across other drivers while driving around.  Most of the time, I will just see them off in the distance, but occasionally, I might pass one on the highway or was the case the last time I played, they chased me, occasionally ramming into my car to drive it off the road for no other reason than because they wanted to.  There are frequent prompts, if you are not already partaking of a mission, to either help someone avoid capture by the police, or if you are armed with a police car, you can join in on the chase.

The police aspect, an add on from the most recent DLC and where the game gets its current name, Calling All Units is an interesting concept, considering the fact that for most of the main story you are at times avoiding police pursuit.  And at least for the first 20 hours, or until what I hoped what I turned off was DLC notifications, your in-game handler would remind you that "you have a free police car waiting!"  So naturally the first time I heard this call, I did head over and was asked if I wanted to purchase the DLC from the Ubisoft Club Store.

I didn't and I probably won't.  Because I'm cheap.

One last thing I wanted to bring up was the power this game requires to run even remotely well.  If you look at the majority of the pictures here, you will see that my computer is able to run the game pretty consistently at around 24 - 30 fps.  I do have the game capped at 30 fps simply because I believe that my computer could not handle 60 fps and rather than have it try and bottom out, 30 works well for me.  What I found out in the above picture, is that if my computer is not plugged in, the game will only run between 8 - 10 fps, which is technically not unplayable, but it is pretty frustrating and annoying.  And I started getting worried before I realized that the problem was that my computer plug had come out of the wall.  And possibly because of the power requirements in the game, I have had The Crew crash on me a number of times.  One day in particular was when I was trying to leave Seattle and the game crashed around the exact same intersection three times in a row, so I quit for the day.

There are probably other things that I could have brought up in depth, such as which of the five or six camera views I prefer, my tactics on how to perform the sickest geographical drifts this side of Tokyo, why a manual transmission in-game is far superior to the sheeple who use automatic transmission, or which car offers the greatest performance the earliest in the game for the least amount of scratch.

What I will tell you, is that for a free game from Ubisoft, this is a pretty damn good game.  I don't think I would have purchased this game at retail, but I can tell you that it has piqued my interest just a bit.  If I do anything first, it might be to buy one of the DLCs if they go on sale, probably because I have already put a fair amount of time into this game that I feel like I owe somebody something.

But for now, I am enjoying driving around the Mico States exploring parts of the country that I have actually visited, and doing missions whenever I decide to fast travel back to wherever the main story currently has me kickin' it.

~JWfW/JDub/Jaconian
And By Morning We'll Be Free

One of the great things about having a nearly indestructible car, is inconceivably driving it up to the top of a mounting, then driving that thing down as fast as you can, hitting as few trees as possible.  Then, you'll end up with great events like:

Or, if you completely forget about the fact that the west coast is right next to an ocean, you'll end up with the following scenarios: