Disclaimer:  I received a free copy of Sagebrush developed by Redact Games and published by Ratalaika Games on the Nintendo Switch as part of #Indieween, the seasonal event for #IndieSelect created by Indie Gamer Chick and maintained by Xinthus.  The game was given and received without expectation or promise of a positive review, only that the game be played and that experience be shared on social media channels.  All of the words and descriptions in this article, unless otherwise noted, are my own from my own experience playing the game.

Sagebrush is a first-person walking simulator mystery, but walking simulator in the best definition of the term.  This is also coming from a person who has loved Dear Esther, Gone Home, Amnesia: A Machine for Pigs, and Layers of Fear, among many other games that have been described as such.  In-game, you have a standard walking speed with the L/R-trigger buttons letting the player run, the A-button which lets you interact with an object and the X-button which lets you look at/through your inventory.  The visual style of Sagebrush is one of the aspects that really drew me into the game when I first saw the trailer a couple of months back as it utilizes a pixelated landscape in a 3D space, but it is done in a way that does not feel like it was due to poor use of engines, but more of a purpose aesthetic. 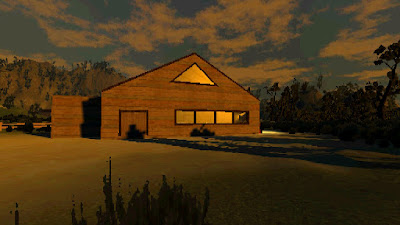 One thing about the trailer that I immediately picked up on and did not seem to be hidden by the developers, were the similarities to the People's Temple Agricultural Project at Jonestown and the suicide that happened there in November 1978.  Everything from a large religious organization following a charismatic figurehead living off of the land in an unspecified location (250 miles NW of Albuquerque, NM which would technically put it somewhere in SE Utah) to the suicide that the player is told that happened some years before the game takes place are all derived from the events at Jonestown.  The in-game location of Black Sage Ranch also has some similarities to the established Rajneesh movement and settlement of Rajneeshpuram founded in north-central Oregon in the early 1980s, except that there was no mass suicide as there was in Jonestown (which is an important distinction to make) and the Black Sage Ranch is significantly smaller in size of location and the number of followers.

When I started Sagebrush, I found myself 100% in.  The voice acting sounded well delivered and genuine, which was a bit of a contrast considering the graphical look of the game, almost like you would expect the dialogue to only be text-based, which would have worked as well.  Even the beginning of the story pulled me in as I find suicide cults, apocalyptic cults, and other extremist Christian organizations tantalizing, partly because I grew up Catholic so I have that background to draw on, but also because I find it interesting to see what people from various walks of life will do in the name of a charismatic religious figure, and what that figure will do to maintain their power/hold.  I really feel like the target demographic for this game.  As I started to explore the seemingly derelict compound, I did start to wonder why I had gone there.  Yes, there is the dialogue between the two women with one telling the other that she noticed a hole in her heart and that a man named James could help her, but why you start out outside the locked main gate in your car when the ranch is seemingly empty confused me a little. 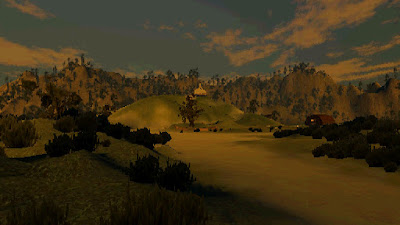 The basics of the game are pretty simple overall.  You can explore an area, and end up finding a physical key and/or a clue in the form of a note or an oddly placed tape deck that leads you to either another key or a place to use a key you just found.  With the help of a map found in the first area, locating the next location is never too difficult, often requiring you to move halfway across the compound, all in the proverbial shadow of the church on a hill.  As stated above, you do have the ability to run, something that always unnerves me a bit in walking-sims because why do you need to run unless it is away from something?  Even though the ability to run is there in the game, I have often found myself walking from a communal meeting hall, down a dirt road, through a rotting/dying cornfield, through an exposed hay storage area, and to a storage shed.  I could have run and covered the distance in about 2/3rds the time (I have not calculated the actual time/distance though. . .yet), but something about walking seems more fitting for the type of game this is.  That was until I became confused as to where to go next and decided to retrace ALL THE STEPS and decided to run around like a mad person.

A lot of what Sagebrush is about is establishing an atmosphere of unease.  The player is told as the game begins that they are headed to a religious compound where hundreds of people had committed suicide, which would have you immediately think that this is going to be a purely information gathering game.  But because it is a video game, the player is conditioned to anticipate an adversarial force to be engaged.  In Amnesia: The Dark Descent and SOMA, you had to avoid creatures often in enclosed areas in order to continue the story, whereas, in Gone Home, there was an air of something bad that could happen while in the familiar space of a family home, yet there was nothing of the sort that happened.  In Sagebrush, you could find yourself alone in a garden shed looking at your map wondering where to go next and then you hear floorboards creek near you.  You could pass through a door and begin to explore a room only to have the door that you just entered a few seconds earlier slam closed while you are 10 feet away.  Nothing has happened to you directly, but the environment plays on our expectations of what video games are combined with the in-game information that we are supposed to be alone on this derelict ranch.

In the end, I have one main criticism of the game, and two minor critiques.  The biggest criticism is that there is no reticule or crosshair to visually focus on when you are trying to interact with objects such as letters, books, light switches and the like.  Games like Amnesia: A Machine for Pigs have perfected the tiny white dot reticule that I only notice when I want to interact with an object, otherwise my brain easily fills in that white space with the surrounding environment.  I can understand not including crosshairs specifically since that could be an indication that there will be guns or other weapons to be used later in the game, but some kind of a reticule would have been most welcome.  The number of times I felt like I was making minor adjustments with the camera in order to read a journal or flip a light switch seemed to happen on a fairly frequent basis. 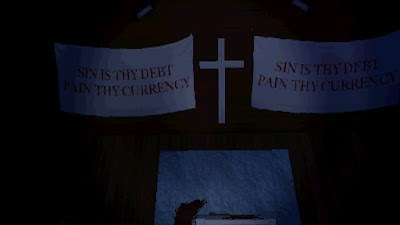 The two minor critiques are just that, minor, as they did not detract from the quality of the game, nor did they make me decry that Sagebrush was unplayable.  The first is that I inadvertently gained access to the final area earlier than I should have, not through a glitch, but because I apparently noticed something before it was revealed through letters/journal entries.  When this happened, I still had not entered either the Mines or the Cleansing Room but was told that it was now time to answer all my questions and head to the Church up on the hill.  I probably could have shaved 45 minutes off my final time by skipping out visiting both sites, but that would have left out very important pieces of the puzzle.  In two other similar instances, I was able to read two letters through a window of a trailer that gave additional information that I should not have been able to access at that point, and in another case, I could examine a bed through boarded up windows before I had access to the house I was about to explore.  The last critique was the voice acting by developer Nate Berens as Father James, which I was not able to buy as the voice of someone who was supposed to be as charismatic as he was depicted.  Granted the depiction of Father James in pixelated paintings could be an inaccurate visage of the character, but even the one instance when you did hear him mid-sermon, I was expecting something similar to Jim Jones, but what I heard instead sounded like a mid-20-year-old guy who was unsure of himself and not the established leader of a congregation.  I recognize that that would be quite a feat for an independent studio to come out with, but it was still something that I thought about toward the end of the game. 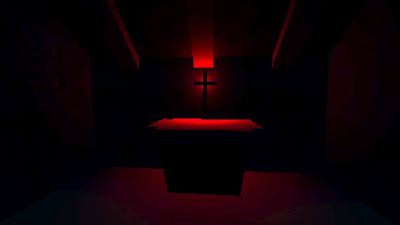 Other than that, I loved Sagebrush, even more so because it is the first game from Redact Games and there is so much that was done right.  The atmosphere is creepy and confusing in the way that mysteries are supposed to be were all on point. Even the story which was not original in a lot of its content (they do admit that the game pulls heavily from real-world apocalyptic cults), it was how the story was told and the pacing that were all effective.  I should also mention that Redact Games, from my own perspective, does a good job of not creating a narrative that demonizing religion as a whole, but instead how people can distort religion to their own aims and drag down the people who have placed their physical and spiritual trust in.  It can be a slippery slope that is handled well.

There is so much more that I could talk about regarding the story, the environment, and especially the end of the game, but I would rather people experience this on their own without outside influence.  I now wish that I actually bought this game instead of receiving it from Ratalaika Games through Xinthus, but hey, if I can find a way to buy someone a download code for the game, if you think you would like a 1-3 hour exploration experience and are not offended by commentary on religion and cults, we should talk.

~JWfW/JDub/Jaconian
Caught up in the Fable, I Watched the Tower Grow 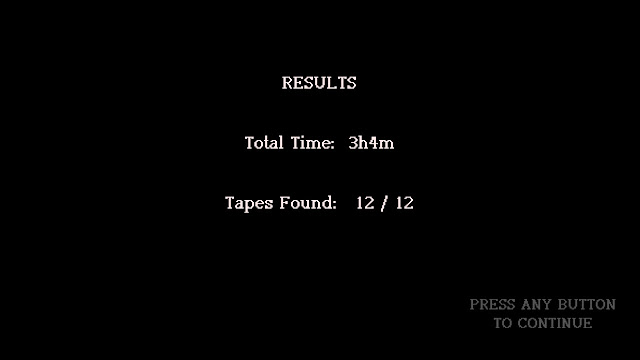