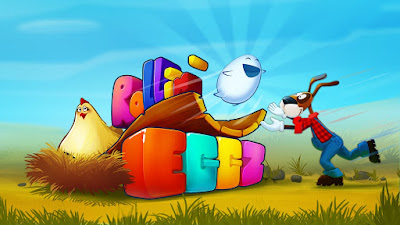 Disclaimer: I received a free review copy of Rollin' Eggz from publisher Grim Talin on the Nintendo Switch.  The download code for the game was given and received without promise of a positive review, only that I talk about and share my experiences playing the game.  All of the words and pictures in this article unless otherwise noted are my own.

When I saw Grim Talin advertising for the release on the Nintendo Switch of their newly published game by developer Square Heads Games, my first thought was that I had played something very similar on an old Nintendo Game & Watch handheld when I was a kid.  My memory told me that it involved bombs instead of eggs (and I am still trying to find out what game it was that I was remembering)*.  Rollin' Eggz as it turns out is not an entirely original concept in its core gameplay mechanic, although the game does contain three separate games and two difficulty settings.  I did not find this out however until after I had played the base game on what turned out to be the Easy difficulty setting for nearly 27 minutes. 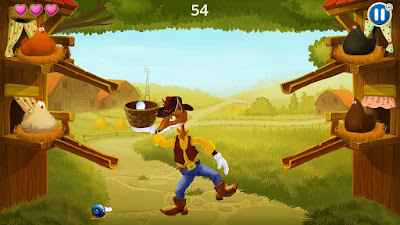 On its own, the base game, "Rollin" is a cute and brightly colored game where you have to catch eggs that roll down one of four chutes before they fall and break on the ground.  Now, to make things more complicated, there will occasionally be rotten (black) eggs or bombs that will fall and if you catch those, then you will lose one heart and after losing three hearts your game is over.  You are able to recover hearts with golden eggs, which are also worth three points while the regular white eggs are only worth one.  There are additional gameplay elements such as the Flash Egg which speeds up the rate the eggs roll as well as doubling the value of each egg.  The point of the game then is to last as long as possible  and score the most points.  The concept is pretty simple and plays like how you might imagine a simple arcade game from the early 80's, albeit with much better looking graphics. 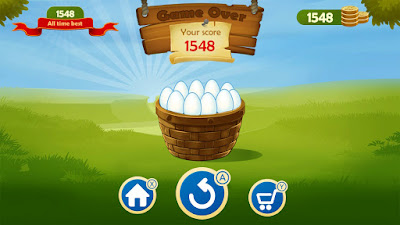 On my first time playing "Rollin," turned out to be 27 minutes, racking up a grand total of 1548 points.  This being my first time playing, I had no idea if this was going to be a good score, an average score, or would I earn three stars for my performance; to note, I let three eggs crash in order to stop playing since quitting would erase any/all progress I had made.  As it turned out, the egg:point:gold coins ratio ended up being 1:1, so I had 1548 gold coins after my first 27 minutes of playing.  I then went to the in-game store, bought both additional characters, and still had 948 gold coins left over and nothing to do with them.

This was also the time that I found where you can change game modes and difficulty levels.  So I started "Rollin" again on the Challenging difficulty, and that was when I felt that the game started to move from monotonous to fun.  For a comparison, this was on my first playthrough on Easy:

And here is the same "Rollin" but on Challenging, with the main difference being that part way through, I catch a Flash Egg and that was when I felt that I had the most fun:

Had the majority of the game played at the speed it does when the Flash Egg is used, I think I would have had more fun.  The rest of the time, the eggs never seemed to roll fast enough to keep me actively engaged.  That being said, the speed of the eggs did pick up a bit while on easy, but that was only after I had reached a score of around 300 and after that, it never seemed to increase even after reaching 1500. 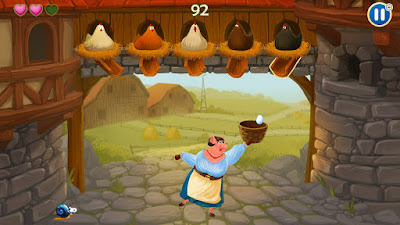 The other two modes, "Raining" and "Rainbow" are similarly played but still a little different.  In "Raining" you now have five chickens to catch eggs from and increased controller movement options using the L+R shoulder buttons to immediately go to the further most chicken, or the middle chicken by pressing up.  "Color" is essentially the same game as "Rollin" but instead you just have to match the color indicated in the upper right of the screen with the color of the eggs that come rolling down the chutes.  You will always have a color matched so there is no trickery on the part of the developers.

I also wanted to mention that the music in the game, seemed appropriate for both the age range and the farm setting.  There were, I think, a selection of three songs that would play randomly (or if it was not random, I did not figure out a pattern).  But there was one faster paced song that I called "The Hoe Down Song" in my head whenever it came on and that I might try to feature in an upcoming MIDI Week Singles article if I can locate the music. 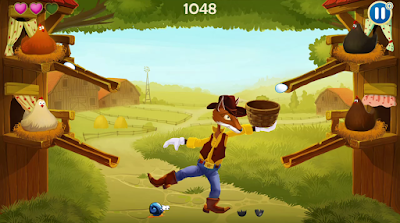 Now, before I get down to more of my critiques, I just wanted to acknowledge that I recognize that I am not the target audience for Rollin' Eggz.  The gameplay is simple, even the slightly more complicated mode of "Raining" on Challenging.  In all of my playthroughs, I only came across one Flash Egg each time, and I am 99.47% positive that I only came across one Bomb each time as well.  I know in the first playthrough I came across one Lady Bug but I could not remember what they did.  And then there is the Snail that will occasionally have an X over it, which will slow down the eggs for a short time.  I ended up only using this twice to see how much it slowed down the eggs, and eventually once it reached the character, it stopped moving and never activated again.  One disappointing thing that did not happen, was with both the Bomb and Rotten Eggs.  There was no secondary animation.  When the Rotten Egg cracked on the ground, I expected there to be some green/black fumes come out of the egg, but there was nothing.  Likewise, when the Bomb dropped, on the ground (or in the basket), there was no flash or explosion noise.  It just made these items that you were trying to avoid a little hollow in their effect.

In a thread on Twitter, Grim Talin did confirm that they have already submitted a patch* to Nintendo to help fix the spawn rate of the various power ups.  Hopefully there will also be general speed increases, especially on Challenging as, by their own admission, that it is targeted towards "seasoned players," presumably parents/aunts/uncles who want to play with younger children.  While playing, I was kind of scoffing at the $2.99 price tag, but I think that that price is actually quite perfect if you plan on playing the game with or buying the game for younger players (maybe around 5-7 years old?) who may not be ready for some of the early NES games available on the NES Online games selection.

So that is where I am at with Rollin' Eggz developed by Square Heads Games, and released on the Nintendo Switch by Grim Talin.  It was not designed for me, but it might be great for much younger players who are not as adapt enough yet to play more complicated games like Super Mario Bros.

~JWfW/JDub/Jaconian
Before The World Starts Breaking Up

*P.S.  I would be remiss not to point out that Rollin' Eggz is essentially a revamped remake of the Game & Watch game Mickey Mouse and Eggs.  The concept of the base game "Rollin" is nearly identical in that you catch eggs as they roll out from one of four hen houses and it is game over when you accidentally let three eggs break, although the inclusion of the various power up eggs and hazardous Rotten Eggs and Bombs builds on the base gameplay.

**P.P.S.    So I may end up writing an update after the update if I feel that the patch warrants it, i.e. if there are significant enough changes to the game that I feel that my article here is now outdated and needs itself an update.