[Disclaimer:  I received a review copy of Tux and Fanny for the Nintendo Switch from developer and publisher Ghost Time Games.  The game was given and received without expectation of a positive review, only that the game be played and a review be posted in a timely manner.  All words and pictures unless otherwise noted are my own from my experience playing the game. 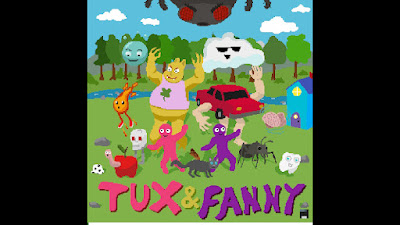 Tux and Fanny is a point-and-click adventure game in which you collect items to use to solve contextual and environmental puzzles as well as gain access to additional explorable areas.  Tux and Fanny is also the first game in a long time that I have had to literally stop playing for a minute because I was laughing so hard.  I could show you a screenshot of what it was that made me burst out laughing, but it would not make much sense.  And that is also a lot of what makes Tux and Fanny brilliantly written, is how much of the game feels like it comes out of left field in its absurdity.  Oh, and you can read the entirety of Moby Dick by Herman Melville, because why not. 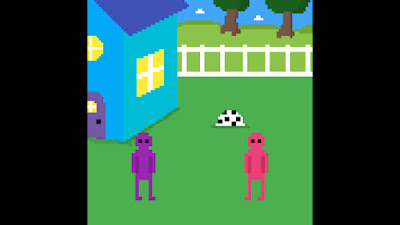 The main object of the game is given to you when you first start out playing after you decide to choose which character you want to start out playing as, although you can readily switch between Tux or Fanny.  Or a cat.  Or a flea.  And while Tux and Fanny are on a quest to find a way to inflate their deflated soccer ball, the Cat and the Flea have their own separate quests and goals to achieve.  But for Tux and Fanny, their objective is to inflate a soccer ball so that they can play together.  And if you travel north of the house, still within their enclosed yard, you find a ball pump stuck up in a tree.  So from the start of the game, you have the object needed to complete the quest and the other object needed to accomplish that task, but no way of getting the ball pump out of the tree to inflate the soccer ball. 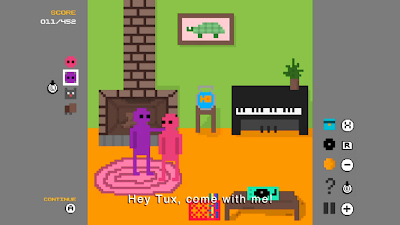 At the beginning of the game, you are relegated to just Tux and Fanny's house, and their surrounding yard as the gates to exit the yard are both locked, so your immediate task is to find the key to unlock the gate.  This leads the player to explore the house to find a single key, which could sound incredibly tedious, but this is one of the areas where Tux and Fanny is amazing.  And the house does a great job of familiarizing the player with the general mechanics needed to proceed.  Using items you find around the house to interact with or combine with objects is the primary method to progress.  You do not have any consumables that you are not supposed to use with specific objects so Tux or Fanny will tell you that you cannot feed the Moldy Strawberry to the Goldfish.  There were a couple of times when I took a screenshot of a number sequence because I knew that I was not going to remember it a few minutes later; in one instance, I had Conklederp write the sequence of 14 numbers down because flipping back and forth between the Switch screenshots and the game was not going to cut it.  That might be the only negative thing I have to say about this game.

And then there is the computer.  Tux and Fanny's computer has been a great source of amusement as well as a tool to help you along in your journey.  It can be used to look up information on the Internet such as construction details, showing you which items are needed to craft a bicycle or a fishing pole, and which paintings or trophies you can sell.  And then there are the individual computer games that you find throughout the game itself.  Each of the games centers around a familiar genre be it a 2D platformer, a top-down adventure game, or a text-based choose your own adventure.  While the computer is physically located in Tux and Fanny's house, the developers have thankfully allowed for shortcut keys to access the computer no matter where your characters are in the game.  There are a few games that you are required to play to progress the story, but mostly they seem to exist to give the player another activity and another button on the Button Board.

On top of the multiple genres in the computer games, the game will take you to a video-game-like screen when performing certain tasks.  The first time you enter the Dark Woods, you start a first-person exploration area taking pictures of creatures and objects.  After crafting a bike, you can ride a bike in a third-person view similar to Rad Racer or Road Rash, although the game is forgiving in that you do not lose when you slam into an alligator or clown.  I genuinely felt that the game had been crafted to provide entertainment, rather than trying to beat down the player with the wicked hammer of difficulty. 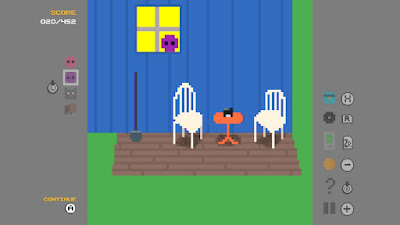 Developer Gabriel Koenig said that the game would take about five to six hours to beat, and around 10 hours to 100% complete the game.  Because it is me, I ended up taking more time than that, but I think that was because I did not always focus on the main quest.  For the first couple of hours, I was not always fully aware when I was completing quests that would help me progress the main story.  Sure I knew that I had to find a way to unlock the safe in the living room to presumably get the key to unlock the gate to go outside the fence, but I did not always know that completing certain tasks would result in finding another number to the combination to the safe.  A lot of my time has been spent exploring new areas, picking up items, and then finding where I can use them a few screens later, or in some instances, completely forgetting that I had a sewing kit or a fox pelt.  I have also spent a lot of time reading any one of the 38 books on the bookshelf; although I have not read Moby Dick yet and it is kind of tempting to use Tux and Fanny to actually read the whole book.  An added bonus is that the game holds your place in the book when you leave and come back so you do not have to flip back to the last page you read each time you start the game. 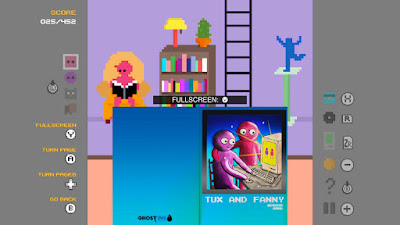 And I cannot recommend enough that you engage with the bookcase to read books.  There have been a number of times that, having explored the world significantly more than in the first 30 minutes, that I rediscovered a hint in a book.  For instance, I had talked to a Goblin who missed the music of the ocean and so I went to the bookcase looking for a book on the ocean thinking that there might be some musical notation for the Thumb Piano to play music for this forlorn Goblin.  It turned out that "Things We Found on the Beach" was helpful, but not in the way that I was expecting it to be.  And then there are more obvious hints for progressing the story like in "Custom Costumes".  There is also an in-game hint system that can guide you to your next objective to complete the main quest, although sometimes that is even cryptic.  "I wonder how our feathered friend by the lake is doing" is a lot more direct than "I wonder what I will find in the heart of the dark forest."  And the character will sometimes rhetorically ask themselves the same hint while you are playing. 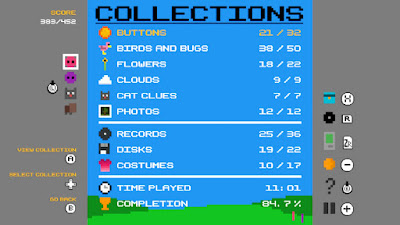 Even using the in-game hint system and reading nearly all of the books (except Moby Dick and a few of the stragglers on the third page of books to read), I still have found myself a little stuck.  I am (as of this writing) 84.7% of the way through the game, which tells me that I have done a lot more of the side quests than I had originally planned on before I started playing so that I could finish the main quest and get this review out on time.  I know I need to bake a cupcake for the final Forest Goblin and to do that I need flour, sugar, and butter.  I have the flour which I somehow earned by gazing at all the possible cloud shapes.  My brain tells me that because Clouds are grouped with Flowers and Birds and Bugs, that I will need to find the remaining collectibles and I will be gifted one of the two remaining ingredients.  I am honestly unsure what I need to do which means I will probably inadvertently 99%ing** the game while just trying to complete the main quest. 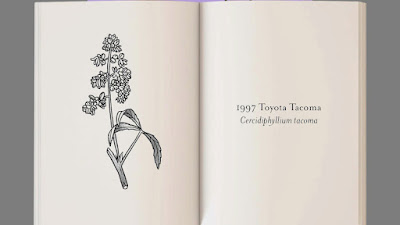 I honestly cannot think of another way of saying how much fun I have been having playing Tux and Fanny, then by unintentionally completing more of the game than I had set out to do.  Like a number of the reviews and Game EXP articles I have written, there are things that I am leaving out, either purposefully or accidentally and I will probably think of those on Saturday afternoon while I am away from my computer.  And because I do not write comedy, the only way I can get across how hilarious I have found the game is to just recommend that you go and play it.  I could include more screenshots of moments when I literally laughed out loud, but that would be like telling you the punchline of a joke without any of the setup; and because it is me, I probably would do a bad job at that too.

Thank you so much to Gabriel Koenig and Albert Birney of Ghost Time Games for the chance to play and review Tux and Fanny on the Nintendo Switch.  I will definitely be looking forward to future projects from these two.

*P.S. I promise that I will finish Tux and Fanny and when I do, I will post an update on my completed time.
**P.P.S. Except I don't know if I will be able to beat the toothbrushing game because that is a pretty cool concept for a Tetris-like puzzle game and I am not the greatest at those and I feel like I will need to beat the high score in order to get the button.

P.P.P.S.  And what the hell is the Old Key for if not to open the trunk of the rusted-out old car!?!?