Well this game was quite the ride. I first started playing in May of last year (2016) and gave my First Impressions last October after having played just over 22 hours.  Well, now after 78 1/2 hours (although actual in-game time is probably a bit lower due to having left the game running without playing on a number of occasions), I can say that I have been taken in by the world created by Polish author Andrzej Sapkowski and visualized by CD Projekt.

Something I found out during the process of playing, was that this game comes chronologically after the existing stories by Mr. Sapkowski, none of which I had read prior to playing the game, so the Geralt in-game was a complete blank slate for me, without any idea as to how the book character reacted to situations or his relationships with any of the characters in-game.  What made this somewhat okay for me (although the storyline explanation was a little thin, but fine), was that Geralt had been killed by a mob, brought back to life at the Witchers' stronghold of Kaer Morhen where he is revived and subsequently has lost his memory.  Throughout the game, Geralt develops his identity through interacting with a wide cast of characters worthy of Twin Peaks.  This explanation is utilized similar to the Samus Effect in Metroid games to explain the reason why Samus has "lost" all of her gear and power ups from previous missions. 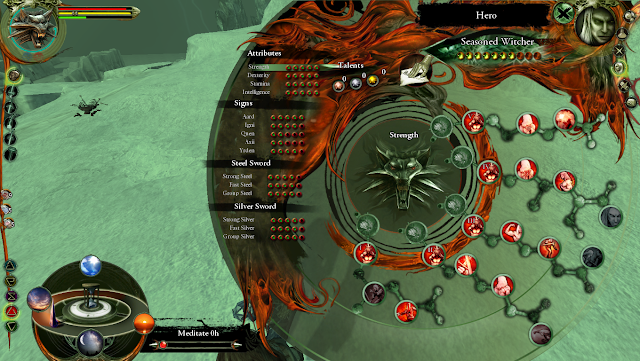 And since we're talking about skills, I present to you how I built my version of Geralt by the end of the game; although to show you the complete picture, I would have to take 15 screenshots to show how I leveled each of the 15 different skill trees, and we do not really have time for that.  But I ended up, around Chapter 4, deciding that I was not going to focus on either the Quen or Axii spells since I wasn't finding that I was using these signs all that often, although for a short while before going against the Striga, I did put some points into Quen as semi-instructed to by the game.  One skill type that is not visible on the skill tree above, was the bomb making skill, which I never ended up learning, nor did I use any bombs at all, so I do not know how effective they are.  I did pour a lot of skill points into the base attributes and tried to equally distribute amongst both steel and silver sword styles. 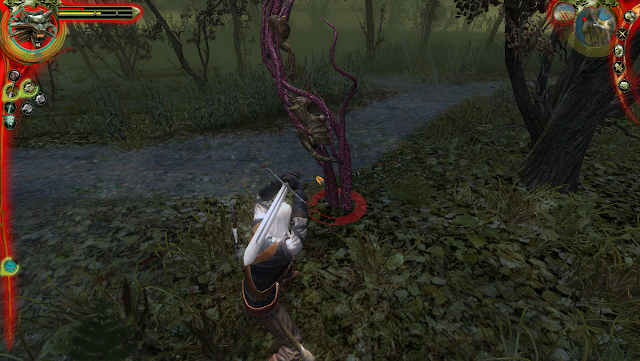 And sword styles is something that I really liked about this game.  That depending on who you were fighting dictated (to some extent) which sword you should use and which type of attack to use on your enemies.  With a strong, fast, and against a group styles, there is a bit of thinking to do rather than just button mashing when attacking.  Coupled with clicking when the "attacking sword reticle" is on fire allows Geralt to perform additional attacks, which is essential in later battles.

What I like about this type of fighting, is that it allows the player to perform attacks that they would otherwise not be able to, such as having Geralt pirouette (something that is often described in the books), flips, and other sword techniques that really make you feel like you are a bad ass (a Polish Jedi perhaps?) and make you look like you know what you are doing.

The music in the game is something that I also very much fell in love with; you can check out a sample of said music from the MIDI Week Single article I posted back in March.  The rest of the music too was very fitting for the world and I never felt like I was being taken out because of either the compositions or the instrumentation.

But, The Witcher was not all glitz and glamour.  I did have some graphical issues (some of which were previously mentioned in the First Impressions) that persisted through to the end of the game. 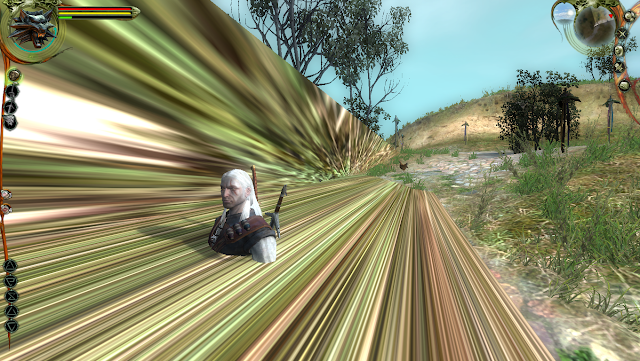 And while the above is kind of an extreme example, which I purposefully angled to look really bad, it never did get to the point that the game was 100% broken.  When things like this happened, I would either just save the game, reload and everything would be fine, or the game would crash, I would be upset because I had not saved in the last 45 minutes, or I would just continue on to another area and the clipping would no longer be a problem.  There were also times when the game would momentarily freeze, the screen would black out, and a few seconds later the game would come back, none the wiser.  And then times the game would just straight up crash.  The game was not perfect, but still a lot of fun, which is the important part.

Storywise, there are three different paths to pick that occur throughout the mid to later part of the game.  For the sake of mentioning it, I sided with the Scoia'tael (the non-Humans) since I felt that that was how I imagined Geralt felt as a mutant and looked down by certain aspects of society.  I would very much be interested to see how the game unfolds under different factions, but that might be at a later date.  I also noticed that while there were specific one time potions you could brew that gave you certain skills or feats that you could not acquire any other way, I found that I rollplayed according to the character and not towards powering up Geralt to gain the highest dps or dots.

In the end, I did have a lot of fun with The Witcher, so much that I went out and bought the first book in the series (The Last Wish), which is a collection of short stories (review to be posted soon).  I am not eagerly awaiting the next GOG sale to pick up The Witcher 2: Assassins and Kings as well as the rest of the books in series.  In short (too late), a fun game that took a bit to get used to, but has a well designed world and visual aesthetic that felt familiar, but not too familiar.

P.S.  A Few more screenshots because GOG Galaxy came out of beta and now allows screenshots (most of the time anyway).