I believe superhero fatigue is a real thing.  The endless Movies and TV shows being released at steady intervals, despite the generally high quality, can get tiring.  It seems like whenever a new superhero idea or property appears, I have an immediate sense of "that would have been cool a couple years ago, but now I don't know."

I am very happy to say that Marvel's The Runaways is cool now.  This is a property I knew very little about going into it, though it had passed through my awareness here and there.  It turns out, the comic series it is based on was written by Brian K. Vaughn, the celebrated writer of 'Y, the Last Man' and 'Saga.'  Vaughn is on as a producer and consultant for the show, which I've heard departs significantly from the comics in terms of pacing. Jane and I really enjoyed this show, and we are eagerly anticipating the second season.

Runaways is a 10 episode season, which just finished up last night.  It stars mostly unknowns, though there are two familiar faces that bring me joy:  James Marsters, most famous for playing Spike on Buffy: The Vampire Slayer (and also a northern California native), and Marshall, from ALIAS (Kevin Weisman), who is a delightful and charismatic actor.  There are 15 principal characters in this show, which is really a lot, but the shows handling of these characters is probably it's best quality.

The story follows six teenagers, who have been friends since childhood, and their parents.  There are two parallel stories of the teenagers and their parents, and each of these is broken into different threads following the characters individually.  To give only the most basic spoiler, the action starts when the kids discover their parents are part of some sort of bizarre murder cult.  From that point, there is a growing amount of tension in the show, as you discover more and more about each character, while they also learn about the parents' secrets.  This tension is managed very well, and carries across the whole season. 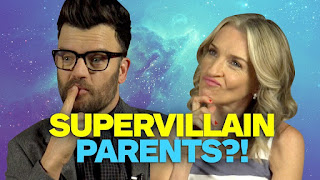 It doesn't hurt that the teenagers and parents are likeable and competently played by all of the actors.  Some characters, like Marshall, his wife Stacey, and daughter Gert are so charming-- I just love them (yes, I'm just calling him Marshall, even though the characters name is Dale).  Other characters take a bit of growing into, like Leslie, the religious-leader mom with the awesome freckles.

Jane and I found ourselves completely sucked in by this show, and really hope it keeps going at the current level of quality.  We're both going to read the comics in the interim, and spoil ourselves on what is to come.  I hear that the entire first season is covered in like a single issue of the comics, so I expect there will be some major differences.

The Runaways on Hulu:  Highly Recommended.