Disclaimer: I received a free copy of Hellmut: The Badass From Hell on the Nintendo Switch from publisher Grindstone of Volcanicc's game through Indie Gamer Chick's #IndieSelect.  The game was given without promise or expectation of a positive review, only that the game be talked about and shared through social media channels, primarily through Twitter.  All of the words in this article, unless otherwise noted were written by me and are my own.

First off, I knew nothing about Hellmut: The Badass From Hell (forthwith referred to just as Hellmut) before requesting a regional key from Indie Gamer Chick, but I liked the two screen shots that I looked at.  I also liked the Hellboy-esque stylized logo.  So when I started the game after downloading from the EU eShop, I was a little surprised (although I really should not have been) to find out that it was a twin stick shooter; think The Binding of Isaac, Smash TV, or the recently played/reviewed #IndieSelect title InkSplosion. 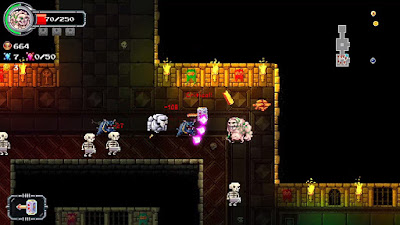 I was a little nervous after my experience with InkSplosion since I felt that the Switch Joy-Cons were not very comfortable with the type of twin stick shooter that they game wanted me to play as.  And since I felt that InkSplosion was a little too punishing for how short the game could be, I was hoping that Hellmut would be a bit more fun and a lot more forgiving.  So upon booting up the game, I decided that I would play through the tutorial in the hopes that I would have more luck here.  Lo and behold, I did!  Thank bloody hell for that too! 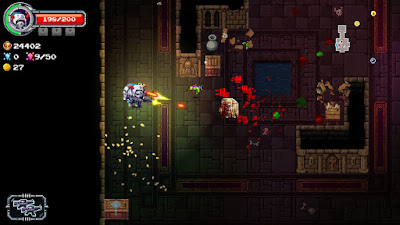 Upon completing the tutorial, I was granted the use of a character named StitchMonster who starts out with 250 health when the standard character, Rat Kind, only has 150 health.  Boon to me for trying out the sometimes lauded tutorial by people who think that they're too good for such childish nonsense.  Which then brings up one of the very cool aspects of Hellmut.  When you start the game, you are just a floating cracked brain exposed skull that is floating/bouncing around and able to shoot weak projectiles.  You then acquire a new form to take which has their own skills, weapons, advantages/disadvantages to consider, hence choosing either StitchMonster or Rat King.  When this character is killed, you become the floating skull again.  Throughout the game, you are able to free other forms to take along with your starter form and skull form.  That was when I freed the character of Ragnar (pictured above), but was apparently unable to keep as a playable character after dying and restarting.

What I really like about this take on the rogue-lite twin stick shooter, is that you are able to switch between any of the available forms you have, if one forms weapon seems more suited for an enemy/boss/situation than another.  Or by switching out before that form dies and before you can make it to a shop to buy health kits, which is significantly cheaper than buying a revive crystal.  And what I love about Hellmut is when I actually manage to play good, because then I feel like I actually know what I am doing.

I guess that is really all I have to say, at least at the moment, about Hellmut.  I wish that the Switch's Joy-Cons were easier to use for me with twin-stick-shooters, but I have managed to score an additional form and have killed one boss over multiple attempts.  The only thing I am unsure about is that in the starting hub where you decided which form to start off with, it looks like there are upwards of six to maybe seven additional characters to choose from, but I am unsure how to unlock them, because it was not the Ragnar character I freed in one playthrough, and I did not get one after defeating one of the bosses.

I guess it is back into Hell I go to find out more about this fun and frustrating game.

~JWfW/JDub/Jaconian
She Lives In A Pig Pen
Posted by Jaconian at 8:57 PM