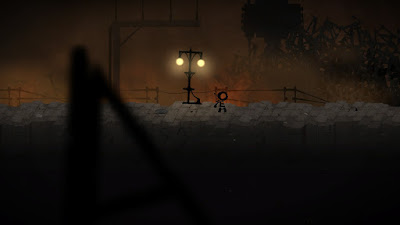 What drew me to Typoman: Revised at first was the font for the title, the name itself, and the icon used in Nintendo's eShop.  Then I watched the Switch announcement trailer and was pulled further in.  The game visually reminded me a lot of LIMBO, in that the atmosphere is bleak and there are traps to avoid and work your way around as well as monsters to avoid as there did not appear to be weapons of any kind.  What substantially differentiates Typoman from LIMBO is the use of words and language to progress through the game, similar to Scribblenauts, but with less freedom for creativity, which in this case is not a bad thing.  While you could claim that Typoman is just a LIMBO clone, but that would be doing a huge disservice to both the game and Brainseed Factory who developed the game.  LIMBO might have been the inspiration for the game, but there is more here than a bleak puzzle platformer. 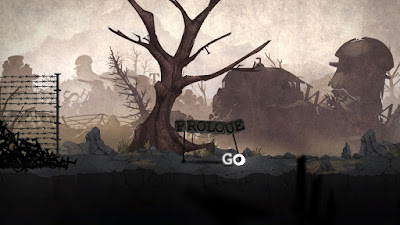 The story in Typoman is pretty light in that there is no introduction to what it is that is happening in the game world.  The game opens by a bunch of letters being dumped into a landfill-type-situation, with a letter O rolling out towards the right side of the screen, prompting the player that this is the way to proceed, also not so subtly hinted at by the PROLOGUE sign breaking with the letter G landing next to you spelling GO.  You then roll towards a gap and with most people familiar with video games, I had already tried pressing all the buttons to see if I could roll faster or jump since an O is essentially a ball, but in the gap/pit are the letters DR_P, indicating to the player that with them as the letter O, this spells DROP and that this is the correct path.  You then come across the letter E and when you connect with it, the O becomes part of EVOLVE, which now allows you to jump/spring forward.  Eventually, your playable character spells out HERO and when you grab a glowing quotation mark, your purpose (to a certain extent) is made clear when the quotation marks reveal a line of text:

Unfortunate is the land in need of a HERO.

It's only one line of text, but it tells you so much.  The land you are in is in some type of peril.  The industrial animations in the background, the post-apocalyptic design of the land itself, and the brown/purple/yellow tint to everything hint at pollution and a decaying world. 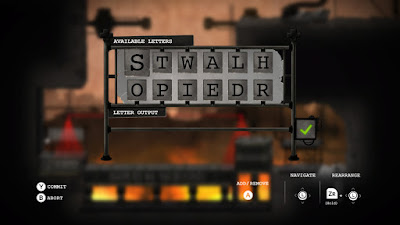 Typoman is all about language, although I have not seen localization ports allowing people who do not speak English as their primary language limiting the game to the English speaking world, which is rather unfortunate.  There are a number of puzzles in the game that are specifically built around spelling words with a limited number of letters, and I fully admit that games like Book Worm,  Boggle, Scrabble, and even Bananagrams are not my forte.  There were several times that I became stuck due to not being able to figure out what words I needed to spell so that I could continue, often involving a blocked passage, a platform that needed to either move or rotate, and in one instance, I had to zoom in using the double-tap-home feature on the Switch to find out that a series of platforms were numbered and needed to be reordered, but the font was too small to see in handheld mode. 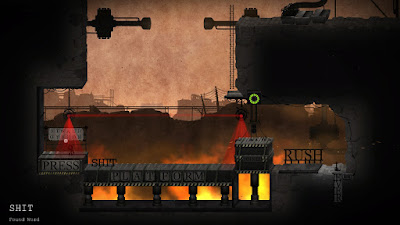 The only thing that I would add to the game is a dictionary of words that you have spelled.  Throughout the game when you come across letters you can move, I frequently tried to spell words to discover easter eggs, but more often than not, I would just be told down in the lower-left corner of the screen that a word had been discovered.  Being told this was nice that the game acknowledged that I spelled a word correctly, but there was never anything keeping track of what words I spelled or how many words that either did or did not have an effect I spelled too.  Maybe something for Typoman: Revised 2nd Edition?

Typoman is not a great platformer as the controls sometimes feel floaty and the way the HERO runs comes across a kind of bumbly, and as mentioned above, some of the word puzzles can be tricky to figure out, but I never felt that the game was trying to be the next Super Metroid or Super Meat Boy.  It was taking the idea of using language and words to solve puzzles in a simple platformer setting.  It is pretty gimmicky, but that is one of the things that I love about it.  I love that in integrates language into the gameplay mechanics, and that there is no real penalty for dying aside from invisible checkpoints.  I love that ladders are made from a bunch of H's stacked on top of each other and that a streetlight is make out of the letters L I T.  I love that when I spelled RAVE, the music changed and there was a multicolored flashing light that had zero effect on gameplay but was something humorous that the developers put in just because.

I do love this game.  It is not perfect, but it never needed to be.  To me, it is a love letter to language and video games, something that there should be a lot more of.