Disclaimer:  I received a copy of UBERMOSH:OMEGA by developer Walter Machado and publisher QUByte Interactive through Xinthus' #IndieSelect event last Saturday.  The game was given and received without promise or expectation of a positive review, only that the game be played and the experience be shared through social media channels.  All of the words and pictures in this article, unless otherwise noted, are from my own experience playing the game. 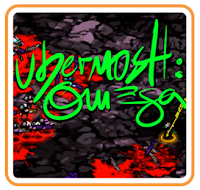 UBERMOSH:OMEGA is an odd game in that there is so much more history to this franchise than what I was expecting going into the game.  When I saw Xinthus' announcement go up last Friday and then watching the trailer, all I saw was a contained bullet-hell twin-stick shooter that was visually harsh on the eyes.  I initially was not sure if I wanted to participate in this particular #IndieSelect event as I have not had the best of luck with other twin-stick shooters in the past (Inksplosion, Hellmut, State of Anarchy), not that the games themselves were bad, but that I was not able to either beat the game, score high enough in the game to feel satisfied, or be competent enough with the game to feel that I understood all that the respective games had to offer.  No, I was just bad at these games, partly because it has never been a genre of game that I have flocked to, and I also blame the controller layout of the Switch for causing my hands to cramp up after fewer than 5 consecutive minutes of gameplay.

While writing this article, I did find out that UBERMOSH:OMEGA is not just a one-off title, but actually the eighth game in an already established series of arcade-style twin-stick shooters.  Then reading a statement (presumably by the developer) on the Steam page for the first UBERMOSH game about why he created this type of game really put everything into a perspective and elevated the game from some quirky indie game to a style of playing that I had not taken into consideration.

"Like a pinball table or a coin-op arcade machine, UBERMOSH was made to give you a shot of adrenaline in a couple of minutes. Each time you play a new level is generated for you to beat your score in 90 seconds."

This simple two-sentence statement about the game completely changed the way I thought about it, and all for the better, all without any changes to the game, but to my way of thinking about it.  Similar to how my perception of the Steam controller changed when I started thinking of it as a keyboard emulator and less like another Xbox controller for PC.  Thinking of UBERMOSH:OMEGA as a game to be played in short spurts just to try and beat your score, not unlike a game of pinball made all the difference in the world.

So I did submit my request of sorts for UBERMOSH:OMEGA and that is why we are here today.  And below you will see my first experience with the game because it is both confusing and hilarious.

Yup.  Your Guess Is As Good As Mine.

What you witnessed above was me selecting the first character and then running around button mashing and trying to figure out what the hell was going on all in the span of a few seconds before I died and was kicked back to the start screen.  My third and fourth attempts with the same character lead to similar results.  My score was a few hundred points, I lasted fewer than 10 seconds, and I had earned a score of F.  Confused as to what was going on, I decided to choose a different character, this time, selecting Woot (I think that's the name, but I could very well be wrong) and had similar results.  I was not until I selected T7 (the third character) that I had better luck surviving longer and managing to actually kill some of the enemies on purpose.  This was when I discovered that the L/R shoulder buttons are what you need to press so that your primary and secondary weapons fire.  It is cheesy to use cliche lines, but this was literally a game-changer because I no longer felt as confused, frustrated, and as lost as I had the last five minutes.

This was also the time that I figured out the general format of the game.  Essentially you are dropped into a closed-off space where you have to survive for 90 seconds against wave after wave after wave of bad guys trying to kill you.  I then played through the rest of the characters finding out that some characters focused on ranged attacks while others had melee weapons that while short-ranged, could also deflect enemy projectiles back at my foes. 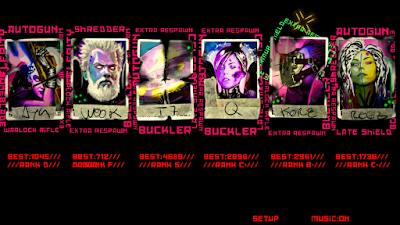 And then I found out that the hard-to-read text surrounding the image of the character you decided to play was not just there for visual aesthetics, but actually served the purpose for you to customize your character's loadout.  Would you rather have an extra HP (to survive an additional hit) and a late-game shield, or would you have no extra HP and instead equip a shield (of sorts) and a melee weapon for your primarily ranged character?  This newly discovered feature made the game a whole lot more enjoyable since I felt I had a better chance of surviving those 90 seconds because I had the ability to customize how I played the game within a pre-existing character's hard-wired skill set.

By this point in playing, things were beginning to click and I was feeling better about the game, with the discovery of the loadout customization and how to actually play the game, the last piece was a visual setting in the options.  Here, you can change the colors of the game to be better suited for people who are colorblind or at least have one particular type of color blindness.  What this did for me, someone who is not, in fact, colorblind, removed the harshness that the bright red/black background (being the blood/gore dropped weapons of your enemies) becomes as you kill more-and-more enemies with a darker, almost black/purple shade of red, being much easier on my eyes.  I played a handful of rounds with this setting turned on, turned it off and determined that it was difficult for me to focus on my character, the enemy characters, and all of the projectiles, as well as the reticule that is used to direct your character's fire.  So I went back into settings again and turned the colorblind blood setting back on.

And that was when I was able to last the full 90 seconds using T7, scoring an S rank in the end.  Since that fateful afternoon, yesterday, in fact, I have again survived the 90 seconds of mania, this time with Kore, and scoring 5044 which is well enough to earn an SSS+ rank.  And I had fun.

UBERMOSH:OMEGA was an interesting ride of a game.  What started out as a confusing screen of death and chaos has morphed into something that I could see myself playing for maybe 10 minutes when I am either between games or maybe something of a palette cleanser.  I am also interested to tool around further with the various skill/buff settings to find different combinations that are fun to play, as well as figure out what they all do because I am still not sure what either Shredder or Celerity do, or even how late-game Late Shield comes into play.  But in the meantime, I may just see if I can last any longer than 20 seconds with Aya and become better at redirecting bullets because that seems like a key skill when you are bringing a sword to a gunfight.