Disclaimer:  I received a complimentary review copy of The Adventures of Elena Temple: Definitive Edition on the Nintendo Switch from developer GrimTalin.  They reached out to me if we were interested in playing a review copy of the game to which I agreed.  I did not promise to give a positive review of the game in exchange for the review code, nor was a positive review expected in exchange.  All words and descriptions unless otherwise noted are my own from my own experience playing the game. 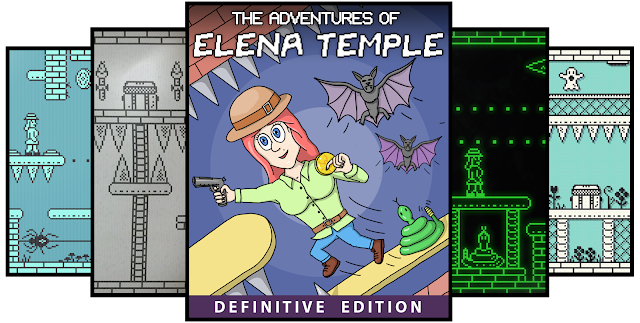 What I love about The Adventures of Elena Temple (TAoET) are the multiple layers in and out-of-game that make this production great.  Before you even start, you are given the option to choose a filter for the game, each with their own has their own heartwrenching backstory about how the game was released on many off-brand computer systems and consoles only to have the game fall deeper into obscurity.  When I first played the original TAoET, I was a little disappointed to find out that the game you play is identical between the Apple off-brand Maple computer and the Nintendo Game Boy Advance knockoff, the Nintendgone Some Toy Advance.  It was probably too naive and demanding of me to expect that each system would have a different variation of the game instead of one of seven different filters. 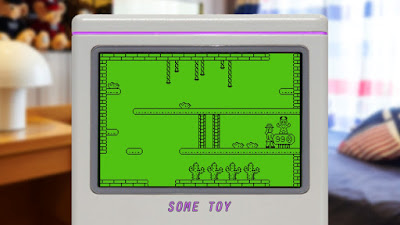 But the filters are so much more than a different color scheme that you can select like on the Game Boy Color.  Sure the colors are semi-accurate based on their fictional system, but there each is accompanied by a frame showing the system the game is being played on along with the environmental surroundings.  For the Nintendgo Some Toy (knockoff Nintendo Game Boy), you are in what looks like a child's bedroom circa early '90s.  But along with this frame, you can zoom in and out which will allow you to see more of the room while still being able to play the game, or you can zoom in so that the playable area takes up as much of the screen as possible.  The music though does not change depending on the frame/filter and the sound effects also remain the same, which again, might have been expecting too much for them to be unique. 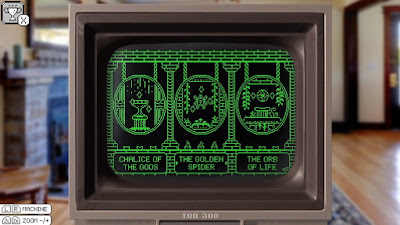 For The Adventures of Elena Temple: Definitive Edition, there have been some additions to the base game that is The Adventures of Elena Temple.  First and foremost are the inclusion of two additional games that function as sequels to the main game, "The Golden Spider", and "The Orb of Life."  Each game uses the same engine as the base game, now given the subtitle "Chalice of the Gods," but there are some new mechanics in each, such as spiders that move along a web when triggered, nearly invincible ghosts that chase you around rooms, and portals that transport you throughout the screen or across multiple rooms.  The objective though is still more-or-less the same: collect coins scattered throughout rooms which unlock a final series of rooms that lead to the end game. 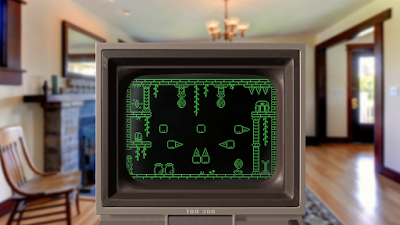 In "The Golden Spider," Elena once again delves into an underground cavern in the search of treasure, but unlike the 49+ rooms in "Chalice of the Gods," "The Golden Spider" only has 16+ rooms, which may not seem like a lot, but the challenge is still there and, for me at least, is a little more manageable.  With each room containing its own separate group of puzzles which forces you to find a gem to put into a pedestal before progressing to the next room.  Additional features in "The Golden Spider" are blocks with rotating spikes which make traversing rooms a lot more hazardous than before.  Coins were also more liberally placed throughout the rooms, and here the chests contain 2+ coins instead of the diamond that they held in "Chalice of the Gods."  I really felt that "The Golden spider" was a concentrated experience, taking all of the best parts of "Chalice of the Gods" while building on mechanics that while new, did not feel out of place. 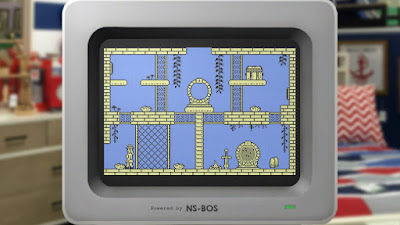 "The Orb of Life" acts more like a direct sequel to "The Golden Spider" as the story introduces a new life mechanic that I at first was not a fan of, but then I discovered how to manipulate it; kind of.  The game introduces a life meter in the form of hearts and each time you die, you lose a heart, typical video game stuff.  I was at first worried that once reaching zero hearts that that would lead to permadeath, but that was not the case.  The other related mechanic is a sword next to a bonfire that acts as a respawning checkpoint.  The catch here is that any rooms explored and coins collected since the last checkpoint will all have to be re-explored/collected.  As the game progressed, I found myself keeping better track of where the checkpoints were so that I could backtrack, hit the bonfire to reestablish the checkpoint and refill the hearts before exploring further.  The other major game mechanic introduced in "The Orb of Life" was portals, which made traversing rooms more of a challenge as you often had to think ahead of where you wanted to be.  There was one room in the late-game involving a room full of portals that gave me some issues, but after dying a number of times and accidentally warping out of the room, I was able to solve this particular puzzle.  Less of a mechanic and more of a feature, are the inclusion of locked gates (that stay open but only after being opened from a specific direction), and one-way platforms and floors.  For the most part, the puzzles were an interesting mechanic to add to the game. 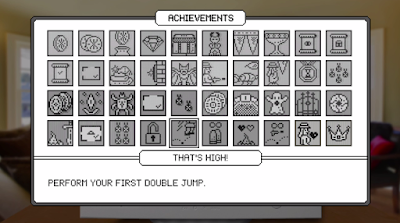 Two more advancements in the Definitive Edition were a series of achievements (in the Nintendo Switch version, these only function in-game, whereas in the Xbox and PlayStation version probably function like regular achievements) and in-game mods that can alter the way you play.  During my playthrough of all three games, I was only able to unlock two mods: one for being able to double-jump, and the other gives you infinite bullets instead of the standard two bullets.  I did try using the double jump, but because so much of the game is built around near pixel-perfect jumps while avoiding a ceiling of spikes, I found that double jumping made me more anxious. I chose not to use the infinite bullets because I felt that a number of the room puzzles require you to manage how you use your two bullets before having to locate bullets on screen, that this felt more like a straight-up cheat code than a mod.  Maybe if/when I decide to go back through the game to 100% "Chalice of the Gods" I may use the infinite bullets mod.

For me, half of the fun of the game was switching between filters/frames, which you can now do in the Definitive Edition with the L/R shoulder buttons instead of having to back out of the game to make the change.  Even though the game stays the same, it was fun playing one version like on an old Apple //e or on a knockoff Game Boy Advance.  I think what all three of the games boils down to, is that they are well-made games and that I had a lot of fun playing Elena Temple's adventures.


For those of y'all wanting to know how well I did in each game, here are my end-of-game scores:

Chalice of the Gods

The Golden Spider
The Orb of Life

And now that you've made it this far, I present to you the trailer!