Disclaimer:  I received a free copy of Drowning on the Nintendo Switch by developer PolygonalWolf from publisher Sometimes You for Xinthus' #IndieXmas.  The game was given without promise or expectation of a positive review, only that the game be shared through social media channels.  All of the words in this article unless otherwise noted are my own from my own experience playing the game.

I want to preface this article by being upfront, in that I do not feely fully qualified to review this game to its fullest extent.  This is through no deficiency of my own as someone who did not finish the game or did not like the format of the game.  Drowning is a game about depression, suicidal thoughts, and other mental health issues.  I do not see myself as someone who can break down this game into all of its parts and meanings and as I continue through this article, I mean no disrespect for anyone reading this who does exhibit signs and symptoms consistent with depression, suicide, or any other mental health issues depicted in Drowning.  So rather than going into an analysis of the game, I am just going to cover my thoughts while playing. 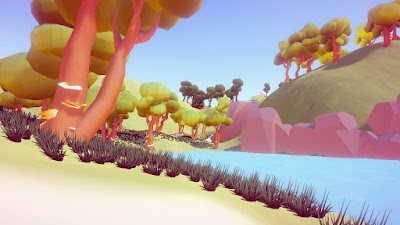 Drowning plays as a first-person walking simulator that contains written dialogue and descriptions that appear on screen as you explore the linear world you find yourself in.  Before starting this game, I knew nothing about it aside from the screencaps that accompanied Xinthus' Tweet announcing its inclusion among the #IndieXmas games. The game starts with a "Year 8" subtitle card and then you find yourself in a forest clearing of sorts with a little path running down the middle.  Because I like to explore in games that I am playing, I naturally tried to walk through the grassy areas, but quickly found out that the play area is only the walking path that you find yourself on.

As I started moving around, this triggered the first sentence in the game to be "typed" out on the screen, which reminded me a lot of the way narration was handled in What Remains of Edith Finch, but here the narration is through text only and no spoken dialogue.  What I find interesting though, is that looking back at the game after having played it, I can hear a voice reading the text and not just the tip-tapping of the words being typed out. 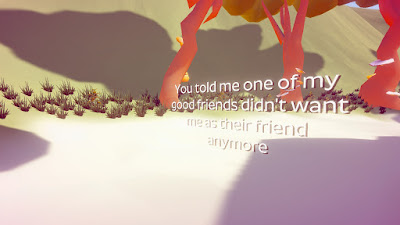 When the story first started, it felt that I was reading a letter that was being written from one person to another, seeing as how there were phrases that were directly addressing someone else.  It became clear early on in Year 8 that the narrator and the recipient of the narration was not a healthy one, but the exact relationship did not feel exactly clear.  It obviously felt like a toxic relationship and even though the title card for the game showed a man with a backpack walking through similar terrain, to me there did not seem to be any indication if it was a man writing to/about a woman, a woman about another woman, or any other combination.  Some of the Tweets I saw while other people were playing referenced the playable character as male, but it really could be played as any gender, for which I applaud PolygonalWolf. 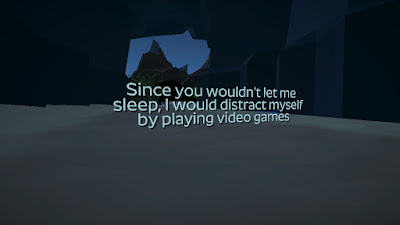 As the game progressed through Year 9 into Year 10, the environment began to change, instead of being in the morning/afternoon, the sun in the surrounding landscape had since set and seemed to be at dusk.  I noticed that the narration was also turning more inward, more introspective.  And even though the narration was talking/writing to someone, it started to feel that there was not an actual person there.  Was the person the narrator talking to just a voice in their heads?  Had the person telling the narrator that they could no longer trust their long-time friends, creating doubt about relationships and school just a voice in their heads?  Thinking about the game thus far in this new light put an entirely new spin on the story that was being told, from a toxic relationship to one that dealt with mental health issues that I know very little about; which means that I am not capable of deciding if this is indeed what the developers had intended, or if it was just a voice of doubt that a lot of us experience in our lives.

In Year 11, the stage started on a bridge, which felt like a literal depiction of being stuck on a path with nowhere else to go but the direction you are headed, be it positive or negative.  This stage did hit me pretty hard once I was now thinking about the narrator talking to themselves instead of another person.

Year 12 was hard.  By this point, I had been playing for maybe an hour-and-a-half, so I had been with the narrator as they had been slowly descending deeper into their depression over the course of four years, to say nothing about the previous eight years that took place before the game started.  What I found difficult was having this text I was reading with my own voice in my head (since I was not reading it out loud) coming to the conclusion that they wanted to end their own life.  I can understand if some people find the story and narration as trite, but for me, it had been very effective as a storytelling device.  Text such as "I am in the middle of a vast ocean," "And I can't keep my head above water anymore," and "I'm nearly out of breath" was a difficult process. 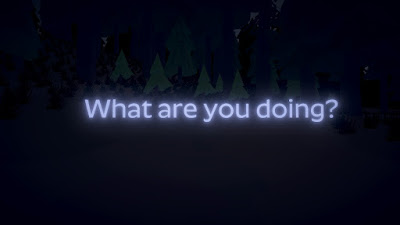 As this stage progressed, moving only forward, I found myself mentally telling the narrator that things were going to be okay, that there were other paths for them to take.  I wanted to somehow help, and not pushing them towards the only end that they felt was available to them.  Thankfully for my own sanity as a player, just at the narration was reaching its darkest point, a new voice was introduced.  The text too was illuminated, something that had not been done up until this point.  This bright text, the questions being asked and the reassurances being given felt like what I wanted to ask were finally being addressed. 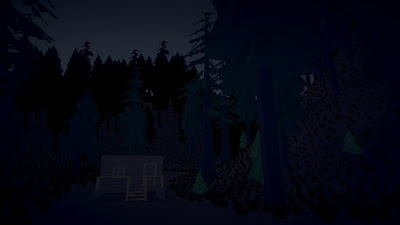 That being said, I knew that simply asking questions of someone in this state would not mean an immediate solution.  And as the path I was walking began to lead downhill, when I came upon a cabin in the middle of the path, I immediately questioned the purpose of the cabin.  Was it a safe refuge from depression?  Was it supposed to be a manifestation of putting up walls against outside influences or this new brightly lit voice?  I did at first walk around the cabin, a little surprised that I was able to do so, but then I thought, at least in video game terms, that if I bypass this cabin, maybe there is another path to this story that does not end well, and then I began to see the cabin as a safe refuge in the middle of a dark forest. Ultimately I decided to enter the cabin. 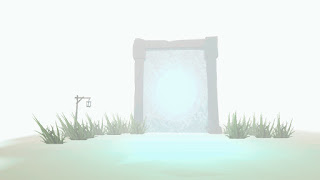 In the game's epilogue, to me, it felt like there was progress that was going to be made.  That our narrator was coming out on the other side of their depression, not that it was "cured" per se, was an important distinction.  To me what the end of the game meant was that our narrator was able to seek out help.  The bright atmosphere did feel a little reminiscent of a depiction of an afterlife, but the narration was a lot more uplifting than what you would expect post suicide.

I have only two criticisms, the first being that your two speeds for moving are either slow, and slightly faster.  This could obviously be a design choice since you want the player to be able to read the text as it appears and there were a couple of areas where I was able to run through the text before it fully formed.  In the late game, around Year 10, there seemed to be only one movement speed.  The second critique is that there is no option to invert the Y-Axis.  There is no real need to look around too much in the course of the game as compared to either a first-person shooter or first-person exploration game, but there were still hills that required the player to look in the direction they were walking and I at times found myself lookings in the wrong direction.  By the end of the game, I had become more comfortable with the control scheme, so it was not as much of an issue.

Drowning was a heavy game, one that I was not fully expecting when I started despite the name of the game.  I do not know if I can say that the game was fun or entertaining, but it was something that I was definitely glad that I was able to experience.  The format of a video game offers a very unique experience to put the player in the mindset of someone experiencing years of depression and possibly other mental health issues I again am not qualified to diagnose.  I recognize that this would not be a game for everyone, but it is a game that I do recommend.