Disclaimer:  I received a copy of Stellatum on the Nintendo Switch from developer Satur Entertainment and publisher Sometimes You for Xinthus' #IndieXmas.  The game was given and received without promise or expectation of a positive review, only that the game be played and that experience be shared through social media channels.  All of the words unless otherwise noted are my own, and all screenshots included were taken during my own playthrough.

If you were to take Asteroids and 1942, you might get something close to the outer space shooter Stellatum.  But you still have a ways to go.  Throw in some resource collection and management, along with some good ol' RPG equipment management and you will be closer to what Stellatum is.  What Stellatum is to me, is a top-down space shooter and spaceship builder with semi-loose controls and a very steep learning curve.

Now for me playing on the Nintendo Switch, there is a lot here that is good, and only a few things to criticize, so let us get those out of the way with first. 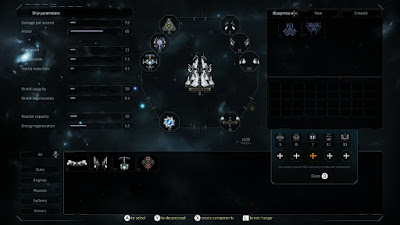 First and foremost, the in-game text is small.  Very small.  If I had to assign a font size to it, it would probably be close to 5.  It is small.  Now, I have not played the game outside of handheld mode so that could be a big part of my problem, but Stellatum feels like it was a game developed with the mobile market in mind, so having text this small does not make sense, at least to me.  There have been a number of times I have used the zoom-in feature on the Switch (double-tapping the Home button) just so that I could make out the wording on how to convert the collected Materia into components. 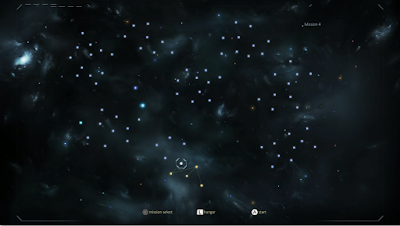 The second is the learning curve is very steep.  By the look of the map, there are 50+ levels and by Mission 5 I felt that I was maxing out on my ship loadout.  After mixing some of the equipment on the ship around, I was able to find a combination that worked, allowing me to casually get through the next mission, but then I hit a formidable wall with Mission 7.  Not so much the mission itself which I am able to get through on a single life, but then the boss battle is where I end up hitting the flaming wall of death.  Granted a lot of shooters I have played are bullet-hell nightmares (Vasara Collection and Inksplosion, I'm looking at the two of you) which means that they are not supposed to be cakewalks, but I feel that the entire concept of Stellatum is that through customization comes victory (you're welcome Satur Entertainment for your new catch phrase). 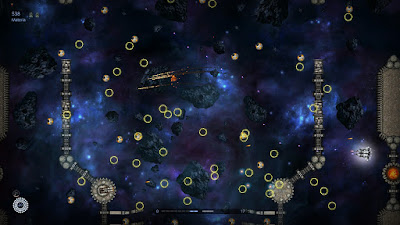 Now that we are moving on from the critiques to what I do love about Stellatum, let us get into the customization feature which is a welcome change to this type of game.  Throughout the levels, you pick up debris from enemy ships, called Materia, as well as the occasional larger part, which you can then use to manufacture new parts to equip your ship.  Better guns, better shields, larger energy pools, differing weapon and sub-weapon types, there is a lot here to outfit your ship with.  From what I have been able to tell, the only way you gain these upgrades is by completing Missions, but you only gain the upgrades once.  You cannot go through the same level and earn more or different ship upgrades, so if you grind levels, the only thing you get is more Materia and ship components, not more upgrades.

And here is the main thing.  I really like Stellatum.  Or more accurately, I really like what I want Stellatum to be, which is not as difficult as it is for me, as well as being able to earn/buy additional equipment for the ship outside of new missions.  It could also be that I am just not that great at twin-stick shooters on the Switch, which I already acknowledge that I am not if Hellmut and Inksplosion are any indications.  I love the concept of this type of game with the added feature of being able to purchase upgrades for your ship instead of the typical Power-Ups that appear during the actual missions.

Stellatum is a fun game and I want to see all of the ways that I can pimp-out my ship, but if I continue to slam my face against that fiery ball of death amidst a screen full of enemy projectiles, then all I am going to get is frustrated and annoyed.